Category - General
Posted - 04/02/2015 03:56pm Santa Barbara Vintners Spring Weekend Returns April 23-26, 2015
SANTA BARBARA COUNTY, CA—One of my favorite wine country events is presented by the folks behind Santa Barbara Vintners Spring Weekend. The vintners association puts on quite a show for visitors. The "weekend", held from April 23-26, covers four days of wine, food and other pleasantries throughout Santa Barbara County. I've been told that this is the largest of the county’s wine festivals. Various wineries and tasting rooms will also hold open houses, special vineyard tours, a silent auction, and educational events over the four day weekend. The Grand Tasting on Saturday April 25, from 1-4 p.m., is the best place to sample wines from all 120 members of the vintners association in addition to enjoying fantastic food morsels from local restaurants, live music, and art. The tasting will be held at River View Park in Buellton, CA, just off Highway 101. 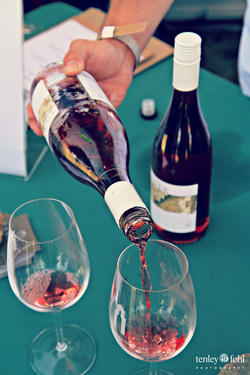 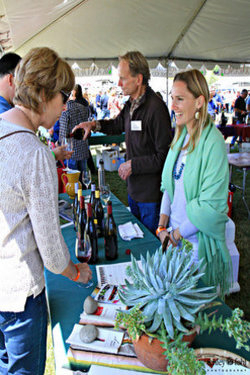 In the far northeast corner of Santa Barbara County, the Santa Maria Bench overlooks the ancient, gravelly banks of the Sisquoc River. The native Chumash called the area tepuztli or “copper coin.” Later, Spanish settlers called it Tepusquet. The steep slopes of the Tepusquet Mountains rise from the valley north of the bench, creating an unobstructed funnel for the cooling coastal breezes and fog that flow from the ocean seventeen miles to the west. In 1970 and 1971, pioneering Central Coast viticulturist Louis Lucas and partners George Lucas and Alfred Gagnon planted Tepusquet Vineyard along this remarkable bench land. The grapes thrived, and winemakers began to covet the fruit grown on the Santa Maria Bench for their rich, expressive character that the terroir imparts to cool-climate varieties such as Pinot Noir.
In 1986 Barbara Banke, proprietor of several family-owned California wineries, purchased a portion of the original Tepusquet Vineyard. She established Cambria Estate Winery the next year to produce single-vineyard and small-block Chardonnays and Pinot Noirs, along with quantities of Syrah and Viognier. Today Cambria Estate Winery occupies 1,600 southwest-facing acres and includes a winery, cellar, and tasting room.
Longtime Cambria winemaker Denise Shurtleff always looks forward to the Santa Barbara Spring Weekend Grand Tasting. “It’s nice to have an event with the focus on Santa Barbara County wines,” she said. “Even though grapes have been grown here for generations the region didn’t really become recognized until after Sonoma and Napa.”
All of Cambria wines are estate grown and bottled. Shurtleff has select 3 excellent wines to be poured at the event. One notable wine that consumers should be sure to sample is the 2012 Bench Break Chardonnay. It is produced from one single block and, according to Shurtleff, “Year after year it consistently produces a stand-alone wine… It makes itself and is a beautiful wine.” It comes from a Clone 4 Chardonnay and is an old vine Chardonnay planted in 1970. Shurtleff says that this is a "well-balance wine with tropical fruit, citrus flavors, and nice minerality."
What they’ll be sampling:
2012 Bench Break Chardonnay
2012 Bench Break Pinot Noir
2012 Tepusquet Vineyard Viogner
#

Carhartt Vineyard
Location: Los Olivos, CA
Appellation: Santa Ynez Valley
Annual Production: 4,500 cases
Winemakers: Brooke, Mike, and Chase Carhartt
Owners: Mike and Brooke Carhartt
The Carhartt connection to the Santa Ynez Valley took root long ago. A descendant of Hamilton Carhartt, founder of the famed Carhartt Overall Company, Mike grew up on the family’s historic Rancho Santa Ynez, a large cattle and horse ranch. In 1993 he and Brooke acquired fifty acres of the former family estate. Mike had been around farming all of his life and had watched the valley develop into a premier wine region, so it made perfect sense for him to devote a portion of the ranch to wine grapes.  In 1996 he and Brooke planted ten acres on a six-hundred-foot mesa with optimal conditions for growing Rhone and Bordeaux varietals: maximum sun exposure, warm afternoons, cool evenings, and sandy loam soil.
At first the Carhartts sold most of their fruit to other winemakers. In 1998, the first year of fruit production, they vinified two barrels for their own label bearing the Carhartt cattle brand. These early Merlots and Syrahs garnered favorable reviews and awards, so they continued to develop their own program and soon had enough wine to open a tasting room.
When I spoke to her about the upcoming Santa Barbara Spring Weekend Grand Tasting, Brooke Carhartt told me that she feels the event, "Not only well represents the area — but also allows people who perhaps have never had an introduction to Santa Barbara County, or our wines, to have most of the local wineries right at hand".
“For us,” she explained, “it allows the chance to reach out to consumers who may not have made it to our tasting room… We’re a relatively young wine region so it's good to see all of the wineries working together to expose the public to the distinct flavors of our regional wines.”
According to Carhartt, 2012 was a nice vintage for Grenache. “Right now, our Grenache is drinking so beautifully. It’s the perfect wine for spring meals as it’s a very food-friendly wine with red cherry notes and lovely spice”.
What they’ll be sampling:
2013 Sauvignon Blanc
2012 Grenache
2012 Estate Syrah*
*Be sure to taste their 2012 Estate Syrah, which will be one of three wines on their sampling menu. It’s is a source of great pride to the family as the grapes that went into the wine are from their first planting back in 1996. The first Syrah the family every made came from this same vineyard.
# 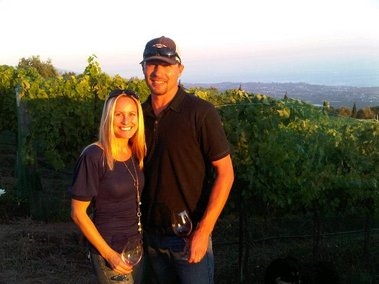 Winemaker Ryan Carr and wife Jessica
Carr Vineyards & Winery
Location: Santa Barbara, CA
Appellations: Happy Canyon of Santa Barbara, Santa Ynez Valley, Sta. Rita Hills.
Annual Production: 4,500 cases
Winemaker/Owner: Ryan Carr
Carr Winery, in the heart of downtown Santa Barbara, ranks among the most distinctive tasting rooms in the region. The red-and-white Quonset hut, which resembles a wine cave, originally served as a military barracks at Santa Barbara Airport during World War II.
Ryan Carr, who owns both a vineyard development company and winery, supervises more than a hundred acres of vineyards throughout Santa Barbara County. All Carr wines are made form Santa Barbara County grapes grown to Ryan Carr's exact specifications. He specialized in Pinot Noir, Pinot Gris, and Cabernet Franc.
When I spoke to him recently about the upcoming Santa Barbara Vintners Spring Weekend, Carr mentioned that the festival has be going for many years. “It’s a great introduction to the region's wines as multiple wineries are together all in one place. You can learn a lot in a short time. Plus, there are usually plenty of winemakers in attendance."
As previously mentioned, the Grand Tasting will be held this year at River View Park in Buellton, CA. "The location this year is great," said Carr. "It's a spectacular setting with lots of room to spread out and enjoy the surrounding hills. The area can often be quite warm in the spring and summer but this location, beside the Santa Ynez River, offers a cool breeze."
What they’ll be sampling:
2014 Pinot Gris
2014 Sangiovese Rosé*
2013 The Yard Pinot Noir
2013 SBC Pinot Noir
2012 SBC Syrah
2012 Cabernet Franc
As this event comes in the spring, Carr will be showing his brand new releases.
*The 2014 Sangiovese Rosé is only available in his tasting room on tap where refillable “growlers” are available.
# 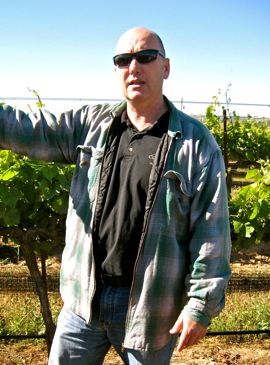 Winemaker Gary Burk
Costa de Oro Winery
Location: Santa Maria, CA
Appellations: Santa Maria Valley
Annual Production: 6,500 cases
Winemaker: Gary Burk
Owners: Burk and Espinola families
Every Friday evening, local Santa Marians and visitors in the know head to the Costa de Oro Winery tasting room to celebrate the end of the workweek—and to launch the weekend in spirited style. They relax in the comfortable lounge, where they order appetizers and fine wines by the glass and bottle.
Winemaker Gary Burk has been making wines under the Costa de Oro label since 2002. Earlier in his career he worked for Central Coast pioneering winemakers Jim Clendenen and Bob Lindquist in the capacity of assistant winemaker. Burk's award-winning wines, praised for their European-style elegance and balance, focus almost exclusively on Pinot Noir and Chardonnay made from estate fruit and other Santa Maria Valley grapes.
Burk who, along with his team, will be pouring Costa de Oro wines at the upcoming Grand Tasting, feels that the Santa Barbara Vintners Spring Weekend is the preeminent wine event in Santa Barbara County as far as the number of participating wineries and restaurants. “It’s the Who’s Who of Santa Barbara County,” he said. “Every winery that is a member of the vintner’s association will be there.” As in past years, there will also be a significant amount of food served at the event. Burk stressed that, “It’s all about food and wine and who is serving the best stuff… You certainly won’t leave hungry.”
Though Burk is admittedly proud of all wines he’ll be sampling, the one wine in particular he encourages everyone to try is his 2014 “Spring Fling”. It’s a 50/50 blend of Chardonnay and Sauvignon Blanc which he bottled early. The wine spent only 4 months in barrel using a combination of neutral oak and stainless steel and Burke adds that, "There was no malolactic... This is much more of a light and refreshing wine – just right for sipping in the spring time. It's a bright, young wine with high acidity and has been wildly popular in our tasting room,” he said.
What they'll be sampling:
2014 "Spring Fling" - a 50/50 blend of Chardonnay & Sauvignon Blanc
2012 Reserva Dorado Chardonnay, Gold Coast Vineyard
2012 Reserve Oro Rojo Pinot Noir, Gold Coast Vineyard
2013 Tempranillo, Santa Barbara Highlands Vineyard
#
For more information about the Santa Barbara Vintners Spring Weekend, the Grand Tasting, or to buy advance tickets CLICK HERE.
NOTE TO OUR READERS: If you have not already done so, please click this LINK to "Like" our Facebook page directly. Clicking the Facebook icon below only registers on this blog post. We are trying to offer more variety in our Wine Country Blog posts and this will help allow us to reach a larger and more diverse audience. Thank you for your help.
—TS