Category - General
Posted - 12/26/2015 02:24pm New Seated Tastings at Bennett Lane
The California Directory of Fine Wineries coauthor Daniel Mangin recently headed to the far northern Napa Valley to check out the new seated tastings at Bennett Lane Winery. Here's his account:
CALISTOGA, CA—Even on a busy weekend, Bennett Lane's tasting room staff does a fine job of juggling the demands of pouring wine and informing and entertaining multiple sets of visitors, but for guests seeking a more personalized experience the winery has begun offering one-hour seated tastings for groups of two to six people. Those who choose this option enjoy a one-on-one session with a wine specialist, getting deeper background about Bennett Lane and its Cabernet Sauvignons and red blend called Maximus.
The Mediterranean-style winery, founded in 2003 by Randy and Lisa Lynch, sits north of Calistoga at the end of a driveway flanked by Cabernet Sauvignon vines. For the seated tastings, a wine specialist escorts the group to a reserved space within the tasting room. The setting—contemporary wing chairs, leather sofas, and coffee tables—is relaxed and informal, as though you've just dropped by a friend's home to share a glass of wine, or in this case four:
2013 Reserve Chardonnay
A recent seated tasting got off to superb start with a 2013 Reserve Chardonnay made from Los Carneros AVA grapes of the well-regarded Sangiacomo vineyards. Some of California's best Chardonnays come from Sangiacomo grapes, and with its harmony of acidity, sweetness, and minerality the 2013 represents a worthy contender.
2009 Maximus
Next up was the 2009 Maximus. Billed as a "Red Feasting Wine," the 2009 is aging well at the six-year mark but still has vibrancy. This wine's tannins are simultaneously silky-smooth and structured, clearly the goal given its time in the barrel (14 months in French oak, 20% new) and composition: 69% Cabernet Sauvignon, 18% Syrah, 5% Malbec, and 4% Merlot and Petit Verdot. This instantly appealing wine has a long finish, the sensory pleasure extended as one reflects on the contribution each component—particularly the Syrah and the oak aging but also the Malbec, Merlot, and Petit Verdot—made to the whole.
The Cabernet Sauvignons
The craftsmanship of the first two wines sets the stage for two stellar Cabernet Sauvignons. The varietal is winemaker Rob Hunter's stated passion, and the highly structured, elegantly balanced wines reinforce two seemingly conflicting adages: 1) that great wines are made mostly in the vineyard; and 2) that the winemaker's finesse and understanding of terroir, the vintage, and the varietal are paramount. As with the Sangiacomo Chardonnay, putting top-quality grapes in Hunter's hands results in a whole greater than the sum of its very fine parts.
Both wines contained 96% Cabernet grapes from the same vineyards and were aged under nearly equal conditions, so the pertinent variables included the vintage and what comprised that other 4%.
2006 Reserve Cabernet Sauvignon
After the 2009 Maximus, the 2006 Reserve Cabernet Sauvignon seemed almost like an elder statesman or woman—mature and restrained yet richly delicious, with the 4% Petit Verdot that Hunter blended in bolstering the tannins and enriching the flavor in exactly the right proportions.
2009 Napa Valley Cabernet Sauvignon
At $55 a bottle, the 2009 Napa Valley Cabernet is priced well below the Napa Valley average of $88 but would compete well (and has) with peers at or above the average. Though similar in style to the 2006, it has pithier notes that, one presumes, derive in part from Hunter's replacing half of the Petit Verdot used in the older wine with Malbec in this one. Even accounting for the difference in age, the tannins seem intentionally tighter, a good fit for the vintage.
Satisfying Encounter
Depending on when you visit, the four-wine selection might be slightly different, but you can expect the quality of the wines and the hospitality to be consistently high. And the wine education. On my recent interlude I received succinct answers to all the wonky questions a wine aficionado might ask, but one of the other guests, a relative novice, felt comfortable enough in the seated-tasting context to ask basic questions about winemaking and varietals. We both left Bennett Lane feeling satisfied on all levels with our encounter.
— Daniel Mangin 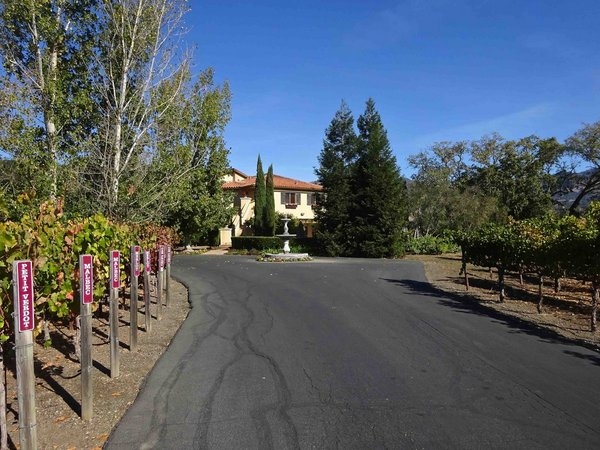 Demonstration garden near tasting room at Bennett Lane contains examples of the varietals used to make its wines. 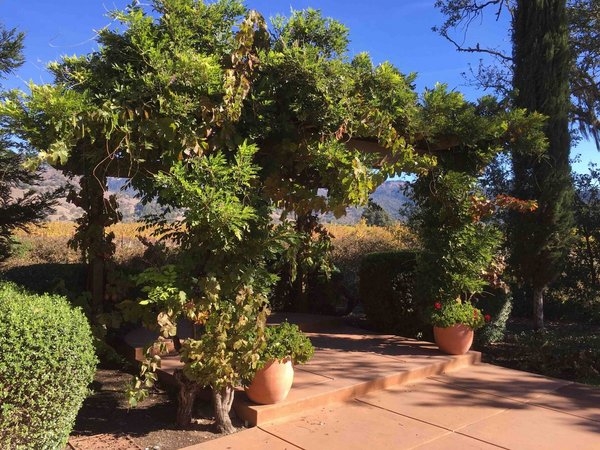 The garden arbor at Bennett Lane frames a view of Calistoga's Palisades. 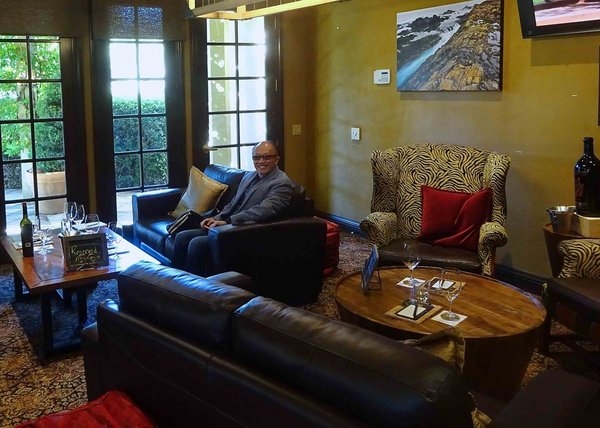 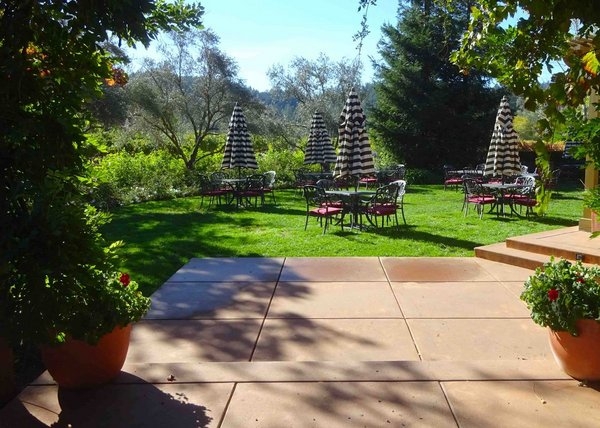 Trees and beyond them rows of vines surround the patio and garden at Bennett Lane. 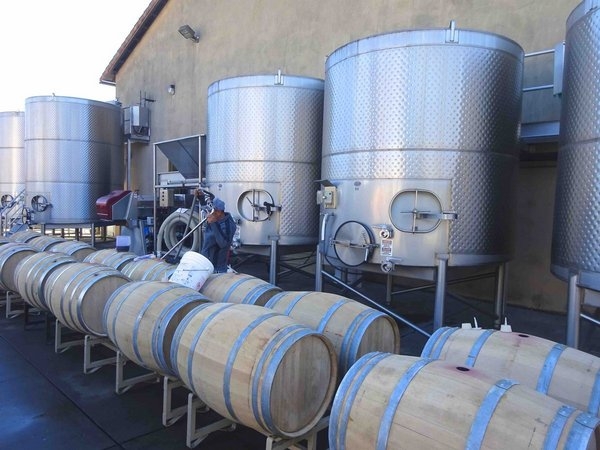 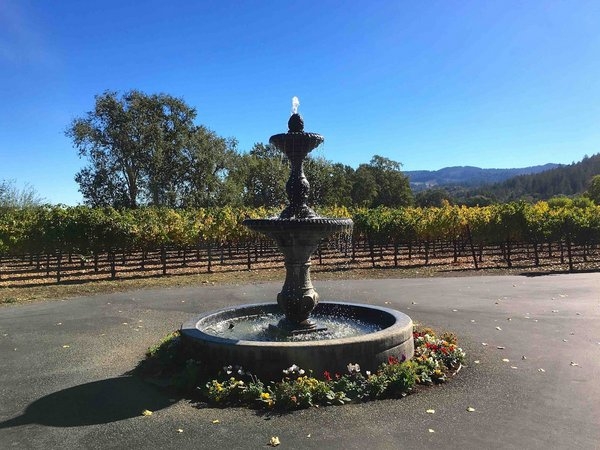 Mountains, trees, and Cabernet Sauvignon grapes provide the backdrop for the driveway fountain at Bennett Lane Winery.
Bennett Lane Winery is about 3 miles north of downtown Calistoga at 3340 Highway 128. It's open from 10 A.M. to 5:30 P.M. daily. You can book a tasting online at VinoVisit or call 877-629-6272.