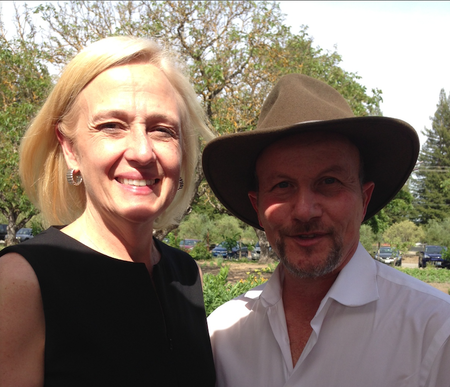 PBS President Paula Kerger and guess who?
SANTA ROSA, CA—Last year, when I introduced myself to PBS President & CEO Paula Kerger at a wine-related affair in Sonoma County, admittedly I had ulterior intensions. At first we talked casually about some favorite California wineries after which I ceremoniously presented her with a hardcover copy of my latest book The California Directory of Fine Wineries, 7th Edition. She gracious accepted the gift and gradually our conversation turned to chitchat.
As the event was drawing to a close, an unanswered question—long dormant but brewing within my gut—began to emerge. There was something that I had to know that only she, the PBS head honcho, could tell me. There seemed no better time than the present to ask.
Rather abruptly, I set down my glass of sparkling wine and boldly stepped in front of Ms. Kerger, impeding her departure. I extended my hands forward with open palms, indicating that she should stop for a moment. Then I moved very close to confide myself.
“Look,” I said in a secretive whisper. “Before you leave I need to ask you a question.” Her head turned to study me more carefully now as I continued. “And I must have an honest answer. Okay?”
With utmost composure she replied. “Well, it depends. What’s your question?”
I looked left and then right to make sure the others were out of earshot. Then I asked her pointblank. “Will ‘Sherlock’ be back?”
Teasingly, she delayed before answering. “I really can’t say. I’m not supposed to talk about it.”
“But, please, I have to know. Benedict Cumberbatch is great. I’m a big fan of the show. And why are there only 3 episodes per season?”
Clearly she could feel my urgency. In that moment, through my insecurity, I saw the start of an ambiguous smile. Perhaps all this wasn’t such a big secret after all. But why was she taking so long to answer? Then empathy appeared across her brow. She exhaled deeply and slowly, which made her shoulders relax.
“Yes,” she whispered.
“Yes?! ‘Sherlock’ will be back?” I couldn’t believe my ears. “That’s fantastic. I won’t tell anyone. At least, not until after it’s officially announced.”
I stepped back, out of her way, and we both continued toward the parking lot. She looked only toward the gravel path as she left me with these parting words: “And you’ll keep it to yourself?”
I nodded vigorously like an excited puppy. “Oh, yes… This is great news.”
And with that I was satisfied. Her gait increased, leaving me behind, while dozens of jabbering well-wishers now vied to escort her to her car and off to the airport.
I have kept this secret for many months until now because it has formerly been announced that indeed Sherlock is back. I just read that PBS will air a 90-minute one-off special, titled Sherlock: The Abominable Bride, which is to premiere in the USA at 9 p.m. (ET) on Masterpiece Mystery on January 1, 2016.
But listen to this. Fans of the series will find it curious that this “special” episode, featuring Sherlock (Benedict Cumberbatch) and his sidekick Dr. John Watson (Martin Freeman), takes place in 1890s London. What? A Victorian era Sherlock? Yes, this time, rather than taking place in the present as the series is normally set, it’s a period episode — a stand-alone movie with the same beloved characters as the popular PBS series. But fear not comrades, the previously announced Season 4 returns the series to present day and is in the process of being written with shooting due to begin in the spring. An airdate is yet to be confirmed.
So, now you know the truth. I do have other passions besides traveling the back roads of California to discover world-class destination wineries and tasting rooms. For now, please, let’s keep this little secret just between us. Okay?
—Tom Silberkleit