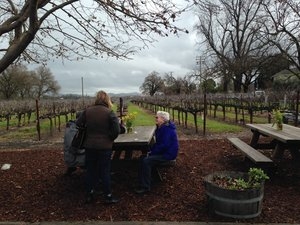 OAKVILLE, CA— On Feb. 4, I attended an annual event that’s long been on my radar. It's the day that Saddleback Cellars stages their “Tag-a-Long Release Party” and BBQ which coincides with neighboring Silver Oak Cellars’ celebrated Release Day. Hence, the name “Tag-a-Long” -- a clever idea which I’m embarrassed to say took me several years to make the obvious connection.

A light rain was falling as I reached the Saddleback Cellars Oakville (Napa Valley) tasting room. The place looks like a country bungalow and is situated across the road from Silver Oak down a rutted rural lane. Grapevines border the driveway which doubles as a crush pad during harvest. 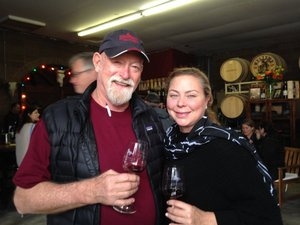 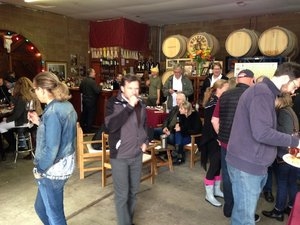 Nils Venge with Zinfandel in hand.

Owner/winemaker Nils Venge parks his 1940s-era Ford tractors near the winery and often can be seen riding high among the vines of his fifteen-acre vineyard. In case you haven’t heard of Venge, he has quite a storied Napa Valley background. In 1970 he managed the vineyards at Charles Krug, before moving to Sterling in 1972. He became Villa Mt. Eden’s first winemaker in 1973 and produced a series of prized Cabernet Sauvignons. Three years later, he purchased the property that would  become Saddleback Cellars and replanted the estate vineyard. He pressed his label’s first vintage in 1982. Venge was appointed Groth’s inaugural winemaker in 1982 and made headlines by crafting the winery’s 1985 Reserve Cabernet, the first American wine to receive one hundred points from Robert Parker Jr. (Not a bad resume!) 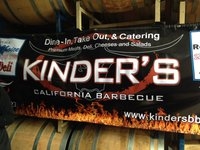 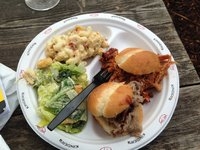 As I BBQ fan, I appreciated the tasty sliders that Kinder's BBQ were serving throughout the afternoon. They brought their set-up all the way from Fairfield. Kinder's has several restaurant locations in the Bay Area and makes good sauce that’s available in local grocery stores. 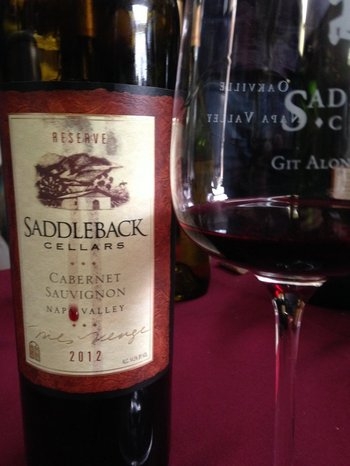 Wine-Talk. Did I taste anything good? Don’t be silly! For this is Oakville the enchanted kingdom of Napa Valley Cabernet. All wines here were solid with a couple of surprises. Here’s what I tasted:

Just released was their 2012 Napa Valley Reserve Cabernet Sauvignon. Mr Parker gave it 94 points. Just 55 cases were produced. $125/bottle. It’s still young so let this one age to get your money’s worth.

2012 Oakville Cabernet Sauvignon (82% Cabernet, 15% Petit Verdot, 3% Petite Sirah) 1190 cases made. Brighter than the previously mentioned 2011. I preferred this one although both were good. Ready to drink right now.

2014 Calistoga Old Vine Zinfandel - A great BBQ pick as the bold flavors in this wine really hold up to tomato-based sauce. A surprise to me! I didn’t expect a zesty Zinfandel like this in the middle of Nils' Cabernet backyard. I returned for seconds on this one. And, hey, guess what? This was the wine Nils was drinking. I’d say that’s consensus enough. $46/bottle.

This low-key winery will require an appointment for tastings. In fair weather you can sip your wine at their picnic tables literally on the edge of Venge’s vineyard. An authentic Napa Valley experience that you will certainly enjoy!